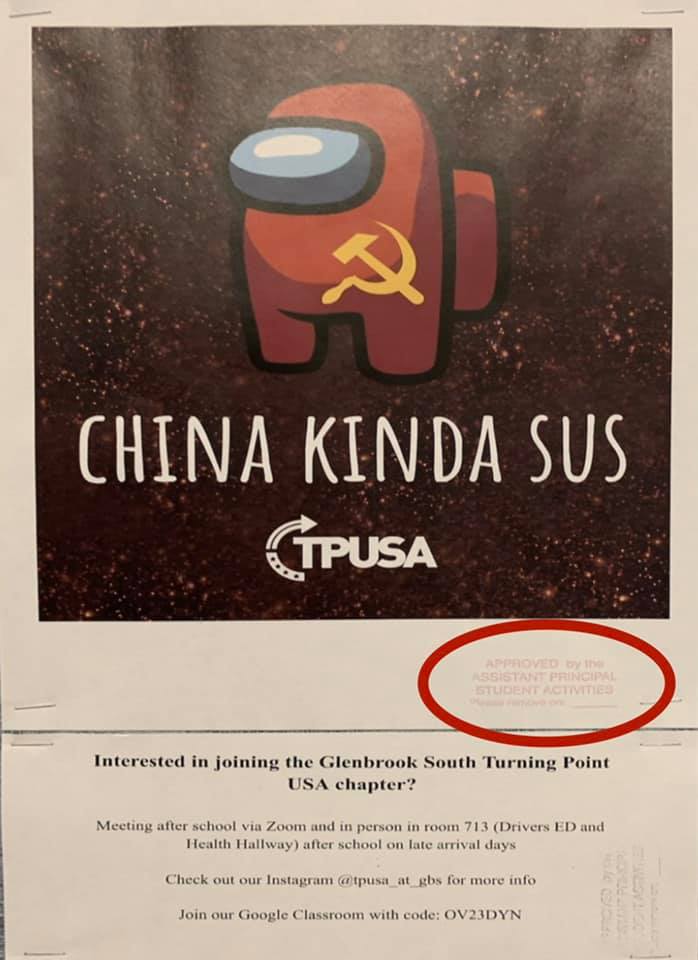 A GBS Turning Point USA reruiting poster, approved by the Glenbrook South assistant principal for student activities office to be posted in GBS hallways, considered offensive by some, features a video game character with a yellow Soviet-era communist hammer and sickle symbol on its chest and the words “China Kinda Sus.” (Image provided)

Members of the Asian community and others in Glenview, including two state legislators, are concerned over a poster they say contains racist overtones and displayed by a student club in the hallways of Glenbrook South High School.

The Turning Point USA club at South displayed the poster, with a stamped approval from the assistant principal for student activities, as a recruiting tool for students. It features a video game character with a yellow Soviet-era communist hammer and sickle symbol on its chest and the words “China Kinda Sus” and “TPUSA” written below.

Students began an online petition calling for an apology and other actions earlier this month. That petition contained more than 1,600 signatures as of late Monday.

State Rep. Jennifer Gong-Gershowitz (D-17th), who is the grandchild of Chinese immigrants and has a child who attends Glenbrook South, said she takes great offense to the images used in the poster. “The clear intent was to stoke xenophobic anti-Asian (sentiment),” she said.

Gong-Gershowitz said she and State Sen. Laura Fine (D-9th) were contacted by constituents and Asian organizations, not just from Glenview, but from across Illinois, upset and offended by the poster and following up to see what action was being taken locally.

The two state legislators released a letter to the community Saturday, May 1, detailing a meeting they had with Dist. 225 Supt. Charles Johns on April 30.

“We expressed our conviction that this racist, harmful sort of content must not be permitted,” Gong-Gershowitz and Fine said. “At a time when anti-Asian racism and hate crimes are being committed at a disturbing frequency, we must come together as a community in support of the values outlined in Glenbrook South’s mission statement.”

That statement discusses creating an atmosphere of “acceptance and inclusion” and a culture “based on respect for all.”

The letter said at the meeting, “Johns committed to taking several important steps toward healing from this incident, as well as preventing similar ones in the future.”

As of Monday, May 10, Gong-Gershowitz and Fine said they had not heard back from the administration since the April 30 meeting.

When asked for comment on the situation, Johns issued a brief written statement Monday night saying, “We are continuing to investigate the situation. This thorough process is critical, as policies have broad implications.”

The student petition said: “We demand a public apology from the GBS administration and TPUSA directed to the communities affected by this message, as well as informative education open to all students regarding Asian hate and the effect of ignorance and insensitivity. We would also like TPUSA students and the Student Activities Board to be held accountable. Lastly, GBS should set a clear policy to prevent future mistakes.”

A few responding to posts on Facebook seemed to defend the poster. “What is wrong with calling out communist China for their part in this pandemic? If this were calling out Russia, you’d have no issue,” one poster said.

Gong-Gershowitz said the poster comes in the context of a rise in anti-Asian violence, including incidents which she said occured in Glenview but were not reported to police.

The Anti-Defamation League pointed to connections between Turning Point USA “members or activists and known extremists or extremist groups.”