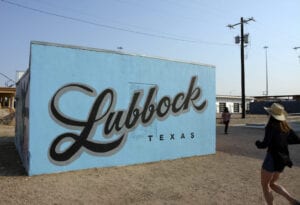 Murals and other forms of art are scattered throughout the west Texas town of Lubbock. A short distance from the downtown area is Texas Tech University that is also known for its works of art both indoors and outdoors

Beneath our shoes, the dry and dusty earth billows a bit as we make our way toward quietness despite plenty of activity both above and below ground.

Small critters pop up here and there throughout the circular-shaped acreage. After a look around, they disappear as quickly as they came diving back into the protection of their burrows.

Lubbock, the west Texas town of nearly 300,000 people, where 1950s musician Buddy Holly was born and raised, is famed for a variety of reasons. It’s a major college town with Texas Tech University. It’s also one of the biggest producers of cotton in the U.S. The community’s emphasis on art, creativity and diversity is blossoming. And then there’s Prairie Dog Town. Population? Anybody’s guess. It’s popularity? Abundant. 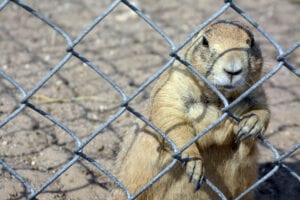 One of Prairie Dog Town’s inhabitants gets stuck behind a chain link fence in MacKenzie State Park.

Created in 1935 by Mr. and Mrs. Kennedy N. Clapp, Prairie Dog Town is part of Mackenzie State Park in Lubbock. People from all over visit in hopes of catching a glimpse or two of the small, brownish-furred animal. The dogs sport dark noses and long claws that are perfect for digging. Visitors aren’t disappointed. Prairie dogs spring up all the time from their subterranean homes. Once up, many stand motionless for several minutes. In some cases, the critters find a way to escape their gated community only to find themselves behind a chain-link fence which is part of Meadowbrook Golf Course. Scattered are yellow golf balls that were obvious misfires from the course’s nearby driving range.

Lubbock, settled in 1890, is situated in Texas’ High Plains. The region is referred to by locals as the state’s Dust Coast. Dallas is located 350 miles east and Amarillo 123 miles north. It’s a community of a special kind of fortitude that has created a thriving existence from a region some people might consider too arid and out of the way. 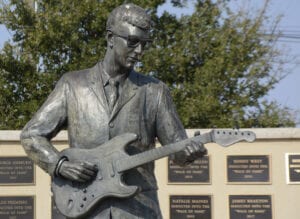 The main attraction in Lubbock is its personal connection to Buddy Holly. Born Charles Hardin Holley on Sept. 7, 1936, Buddy’s short but accomplished life was like a comet flashing across the night sky. Surrounded by a musical family, Buddy first gained attention in the early 1950s for his talent on the guitar and for his writing. As the world’s youth were discovering rock n roll music, Buddy and his bandmates, later called “The Crickets”, opened for several Elvis Presley performances and for Bill Haley & His Comets. By 1957, Holly was producing smash singles like “That’ll Be The Day” and “Peggy Sue”, which was originally named “Cindy Lu” after Buddy’s niece. 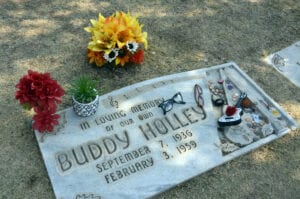 Fans of 1950s musician Buddy Holly frequently visit his gravesite to pay homage and leave mementos. Holly was born and raised in Lubbock.

Tragically, at the height of his career in 1959, Holly and his band members Richie Valens, The Big Bopper and pilot Roger Peterson, died in a plane crash as they were taking off from Clear Lake, Iowa. That, according to songwriter Don McLean, was ”The Day the Music Died” in his song “American Pie.”

Despite his death at age 22, Buddy Holly is anything but forgotten certainly not only in Lubbock but also around the world. He was named to the Rock N Roll Hall of Fame in Cleveland in 2000. Visitors to Lubbock can’t help but notice replicas of the performer’s famous black horn-rimmed glasses all over town. A giant pair stands in front of the Buddy Holly Center. That’s where his life from childhood to his death is on display through photographs, letters and memorabilia. The center’s address is 1801 Crickets Ave. Entry is free for the public to enjoy and learn. 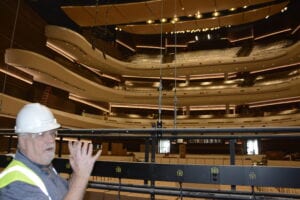 The newest and biggest addition to the Lubbock landscape is the recent opening of the Buddy Holly Hall of Performing Arts and Sciences. Its 220,000 sq. ft houses two large performance pavilions, one of which can accommodate 2,200 concertgoers, a high-end restaurant, an arts academy, displays of art and a modern lobby. 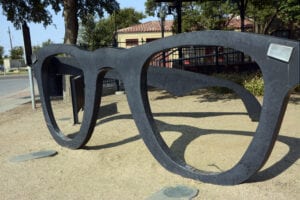 Across town from the Holly Center rising from the dust is the new Buddy Holly Hall of Performing Arts and Sciences. Within days of officially opening, this memorial to Buddy and the Arts is as enormous as it is impressive. Its 220,000 sq. ft. will include the 415-seat, 24,255 sq. ft. Crickets Studio Theater, the four-level Helen DeVitt Main Theater and its 2,297-seats, Ballet Lubbock Pre-Professional Academy, a multipurpose event room, and a spacious lobby that’s welcoming and can accommodate gatherings of 300. Within the lobby is a circular staircase that leads people to the building’s upper levels. Also inside is a high-end restaurant named Rave On! In 1958, one of Holly’s greatest years, he released the hit song “Rave On!”

The brownish soil that surrounds Lubbock, while dry, is nevertheless productive. Thirty percent of the world’s cotton is grown in Lubbock County. Dairy farms produce lots of products, and surprisingly vineyards have flourished here for generations. Texas is the fifth-largest wine-producing state in the U.S. Nearly 90% of the state’s wine is grown in the High Plains. Among the local winemakers that produce thousands of barrels a year, and host public tastings are McPherson and LaDiosa Cellars. 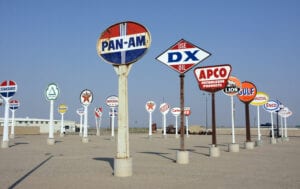 A most unusual stop in Lubbock, Texas, is Cook’s Garage where dozens of old-fashioned gasoline signs are placed in neat rows outside the property’s restaurant. (Journal photos)

When heading for downtown Lubbock, noticeable in the distance are a number of individual oil pumpers rhythmically bouncing up and down sucking black gold from below. Once in town, many dark reddish streets are paved with bricks. Close by is the town’s Art District, which has evolved over the years to blend in with Holly popularity. The district encompasses about four square blocks made up of small studios where artists imagine, build and live. Their existence is reflected in the many public art displays scattered throughout town.

Even though it’s West Texas, Lubbock’s restaurant scene is much more than just beef. A number of charming restaurants are open for dining such as the centrally-located Burklee Hill at the Kress. Here, a hand-crafted food menu is designed for wine pairings, which is proving to be more and more popular. Breakfast offerings include Monomyth Coffee House, and the Cast Iron Grill.

Lubbock, like many communities throughout the U.S., has discovered the joy of being home to several craft breweries. Up until about a decade ago, the town was dry, meaning alcoholic beverages could not be legally served. Voters eventually had enough of that rule and demanded that Lubbock continue its march to being a much more open place. One of the latest craft breweries to open in the center of the city is Two Docs Brewing Company. Founded by two doctors, this popular spot features a large outdoor area and live music. One of its most notable beers is named “Buddy Hoppy IPA.” It packs a pretty good punch with its 7.1% alcohol level. During certain months when the weather in Lubbock is calm and refreshing Two Docs is filled.

Several new hotels have also been developed in Lubbock including the boutique Cotton Court Hotel located in the heart of the city. Its 165-rooms sit only a mile away from Texas Tech and its wide array of outdoor campus art offerings. Even closer is Lubbock’s Depot District and its many shops, restaurants, bars and nightlife.

To reach Lubbock by air from Chicago, a brief layover in Dallas is necessary.