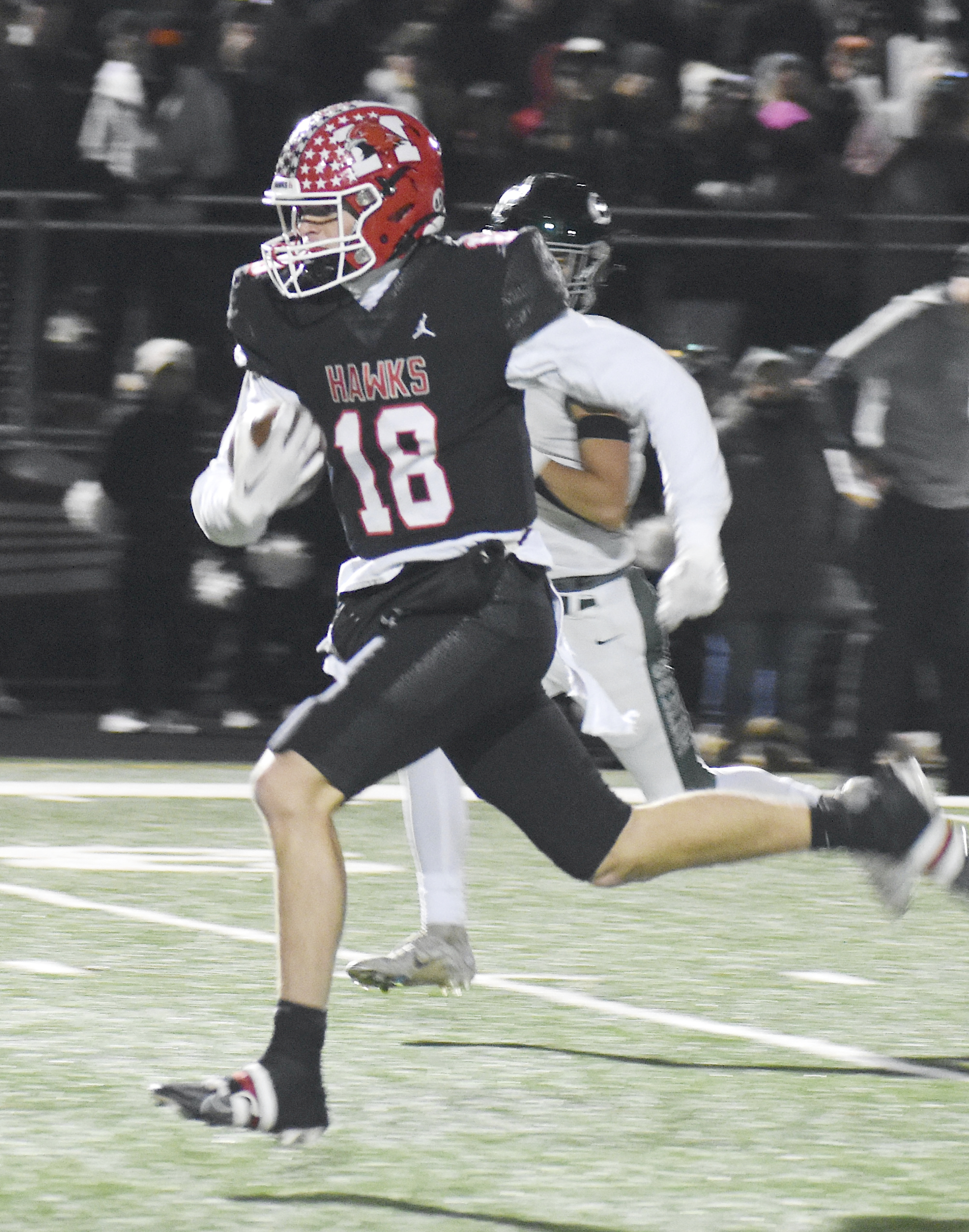 Maine South’s Sean Mullan was off to the races on a first-quarter touchdown reception during the Hawks season-ending 37-34 loss to Glenbard West. (Kaleb Carter/for the Journal)

Maine South scored on each of its first-half possessions Saturday and still found itself trailing at half in what ultimately came to be a 37-34, season-ending Class 8A state quarterfinal loss to powerful Glenbard West.

An 80-yard touchdown drive, punctuated by a Michael Dellumo 2-yard plunge, got the Hawks on the board first.

Sean Mullan caught a short pass over the middle from senior quarterback Ryan Leyden on Maine South’s next drive and skedaddled 68 yards to pay dirt for a 14-7 lead.

It was the first big completion on a huge night for Leyden, who was 19 of 24 for 397 yards passing, with 3 touchdowns through the air and another with his feet. Leyden missed most of the season due to injury, but came back late for the playoff run.

“We lost him in week two, but there was no let-up,” Maine South coach Dave Inserra said. “There was no feeling sorry for ourselves. Our kids battled really hard. We got better as a full team, as a unit, and every single man. These kids, they have so much pride in Maine South football, they were never going to let up and they never let up until the last minute when we were down 16 we still thought we had a chance.”

Each time, the Hilltoppers had an answer. After Maine South had gone up 7-0 following Dellumo’s score, Glenbard West’s Joey Pope popped a 61-yard touchdown to even the score 7-7.

And after Mullan’s score put Maine South ahead 14-7, the Hilltoppers took some time to march 67 yards before a Korey Tai touchdown pass to Filip Maciorowski, evening the game again, this time 14-14.

What came next, changed the outlook of the contest.

The Hilltoppers dialed up an onside kick, recovering it to take possession.

Glenbard West proceeded to power ahead through a combo of Julius Ellens and Tai runs before Jack Oberhofer hammered home the go-ahead score to put Glenbard West up 21-14 early in the second quarter.

Rather than play things conservatively, the Hilltoppers asked kicker Marcello Diomede to do something wild.

The Hilltoppers took advantage of the short field and pushed their way to one of Dimede’s three field goals, this one 43 yards. The other two, which came in the second half, were 22 and 33 yards apiece.

“You can’t beat Maine South in shootouts, you just can’t,” Glenbard West coach Chad Hetlet said. “And I don’t want to be in a shootout, so we had to find a way to steal a possession and I didn’t think we were going to get a turnover and we got a turnover in the second half. Those onsides, if you get it you get a chance to eat the clock and keep their offense off the field.”

With the Hilltoppers up 10, the Hawks did not fall prey to another onside attempt. Instead, Maine South went to work. Leyden hit Maurice Densmore for a 19-yard completion, for some of his 66 yards on 5 receptions.

A trio of Dellumo runs moved the ball, setting the table for a 22-yard Leyden scamper for a touchdown.

Believing they would head into the half down just 3 points, 24-21, the Hawks kicked off.

After the second of Diomede’s 3 field goals opened up a 34-21 GBW about halfway through the third quarter, the Hawks were looking for a big response. Instead, a Hawks fumble (recovered by Eli Limouris) after a reception gave the Hilltoppers short field, which led to another field goal.

The hosts drove on the ensuing possession but a holding call doomed the drive and led to a turnover on downs.

Maine South pushed the ball into the red zone on its next possession but was denied thanks to timely sacks by Limouris and Brandon Kud.

Leyden completed a pass to Mullan for 18 yards but ended up 7 yards short of a conversion on fourth down.

After another Hawks stop, Leyden was able to hit Mullan (35 yards) and Ryan Pothast (49 yards) for scores, the latter coming on what looked to be a sure interception. Instead, the Hawks had life remaining with 1:08 to go.

But the onside kick did not go in Maine South’s favor. In the cold November night in Park Ridge, the Hilltoppers ran out the clock on Maine South’s season.

Pothast had 72 yards on 2 receptions and Evan Agosto added 66 on 5 catches.

“The boys battled all season long,” Inserra said. “We were…6 points away from an undefeated season — 3 losses to 3 really good teams. There’s nothing to be ashamed of.”